From Wikipedia the free encyclopedia

Sh2 -132 is an extensive emission nebula visible in the constellation of Cepheus .

It is located on the southern edge of the constellation, a short distance from the border with the Lizard , along the plane of the Milky Way ; the most suitable period for its observation in the evening sky falls between the months of July and December and is considerably facilitated for observers located in the regions of the terrestrial northern hemisphere .

Sh2-132 is located at a distance of almost 3200  parsecs (almost 10400 light years ), thus placing itself within the Arm of Perseus , in the region of Cepheus OB1, a large and bright OB association . The stars responsible for the ionization of its gases are very hot and massive; in particular, two Wolf-Rayet stars have been identified , known with the initials HD 211564 and HD 211853 (the latter also having the initials WR 153), in addition to a star of spectral class O8.5V and a dozen stars of class B. Around the class O star and one of the Wolf-Rayet stars extends a clearly visible bubble in the band ofradio waves , identified with the abbreviation Shell B , probably originated from the stellar wind of the two massive stars. A similar but smaller structure, Shell A , houses a star of class K near its center. It is believed that chain star formation processes have taken place in the nebula in the past ; these processes currently appear to be suspended, as there is no trace of recent activity. [2] Nine sources of infrared radiation have been identified in the direction of the nebula [4] and a maser with H 2 O emissions . [5][6] 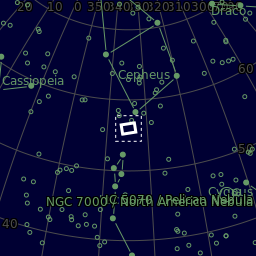